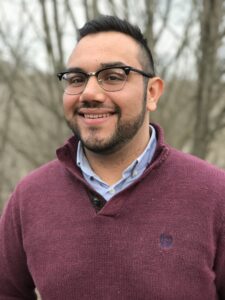 St. Francis Community Services, one of eight Catholic Charities of St. Louis agencies, is pleased to announce the appointment of Carlos Ruiz Martinez to the role of Director of Immigrant Services. Martinez oversees the bilingual mental health services and case management, operation of their afterschool youth program, and their Vietnamese Health Clinic.

“We are excited to elevate Carlos as a director at St. Francis,” said Liz Hare, Executive Director of St. Francis Community Services. “Previously one of our Bilingual Care Coordinators, Carlos will utilize his professional and academic background to lead the department and further our mission.”

Martinez received a Master of Arts in American Studies from Saint Louis University, where he researched churches involved in the Sanctuary Movement. Currently, he is completing a PhD in the Department of Religious Studies at the University of Iowa. His doctoral research focuses on the history of Catholicism in the United States, with special attention to issues of race and immigration. Martinez is also focusing on religion in U.S. public life, especially how immigration agencies intersect and interact with religious people and institutions. He has published work in U.S. Catholic Historian and has presented at the American Academy of Religion.